One of the patterns that I utilize while looking at the WPC day 7 maps is the ability to determine when the model and WPC scores will crash.

On multiple occasions this winter in the Accuweather forums I have been able to discern the Day 7 maps verification by using a simple pattern recognition looking at the above chart. Depending on where we are in the pattern I will tell the members of the forum how close it will be to verifying.

Here I am telling everyone to remember my rule in the February 15th-17th storm thread. Later that same day, I posted the forecast vs reality in the February 24th-26th thread as to what happened for the January 23rd storm.

Finally, the next day I posted this regarding my thoughts on the storm track.


Based on my WPC anomaly correlation rule and the "big storms come NW", look for the slp to travel in a track between the Ukie and the WPC. aka...in Northern MS and AL, then just East of the aps roughly to DC up I-95.

As you can see, it was even farther NW that what I was envisioning. One can even make the argument that if we went by the "triple point", I was even closer than that.

During the same time that I made my call of the storm being more NW than what the WPC was showing, various outlets were calling for a coastal.

Joe Bastardi on February 18th was supporting the Euro packages for obvious reasons... 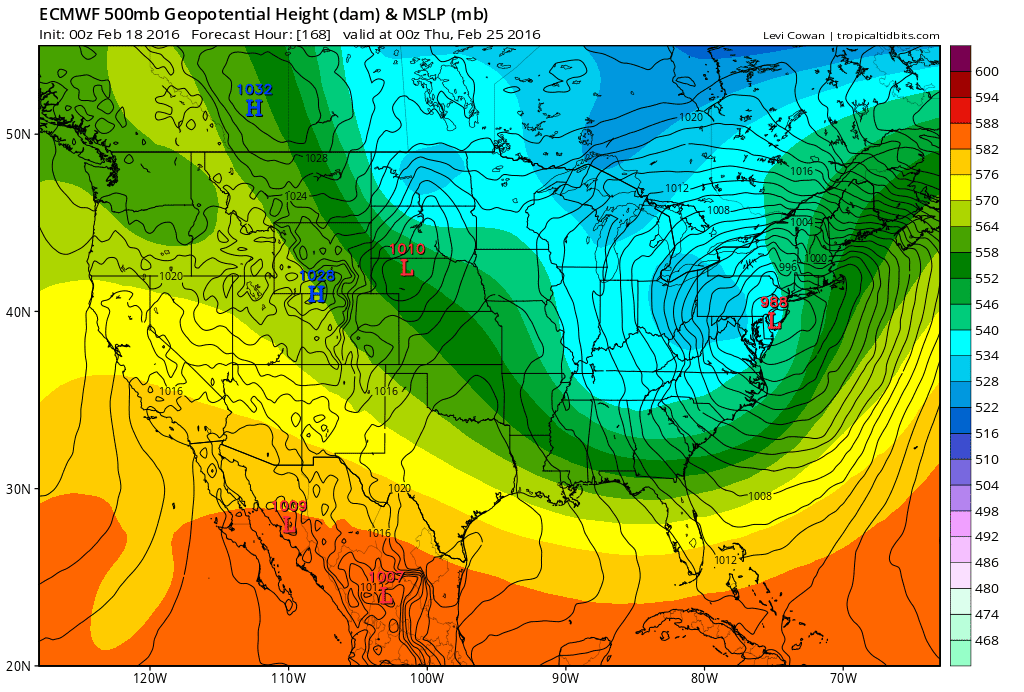 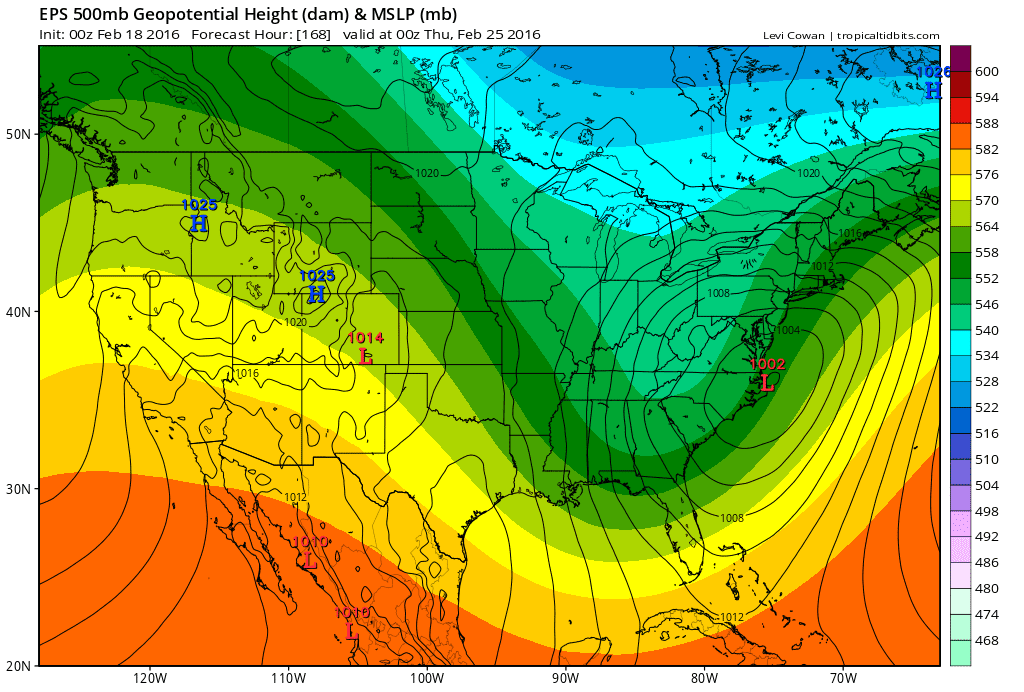 Just in case someone goes and tells JB that I quoted him...just make sure that you give him my name and the nickname he gave me back in 2012...Missouri Mauler. Take a listen on July 29th, 2012 around the 45:00 minute mark. 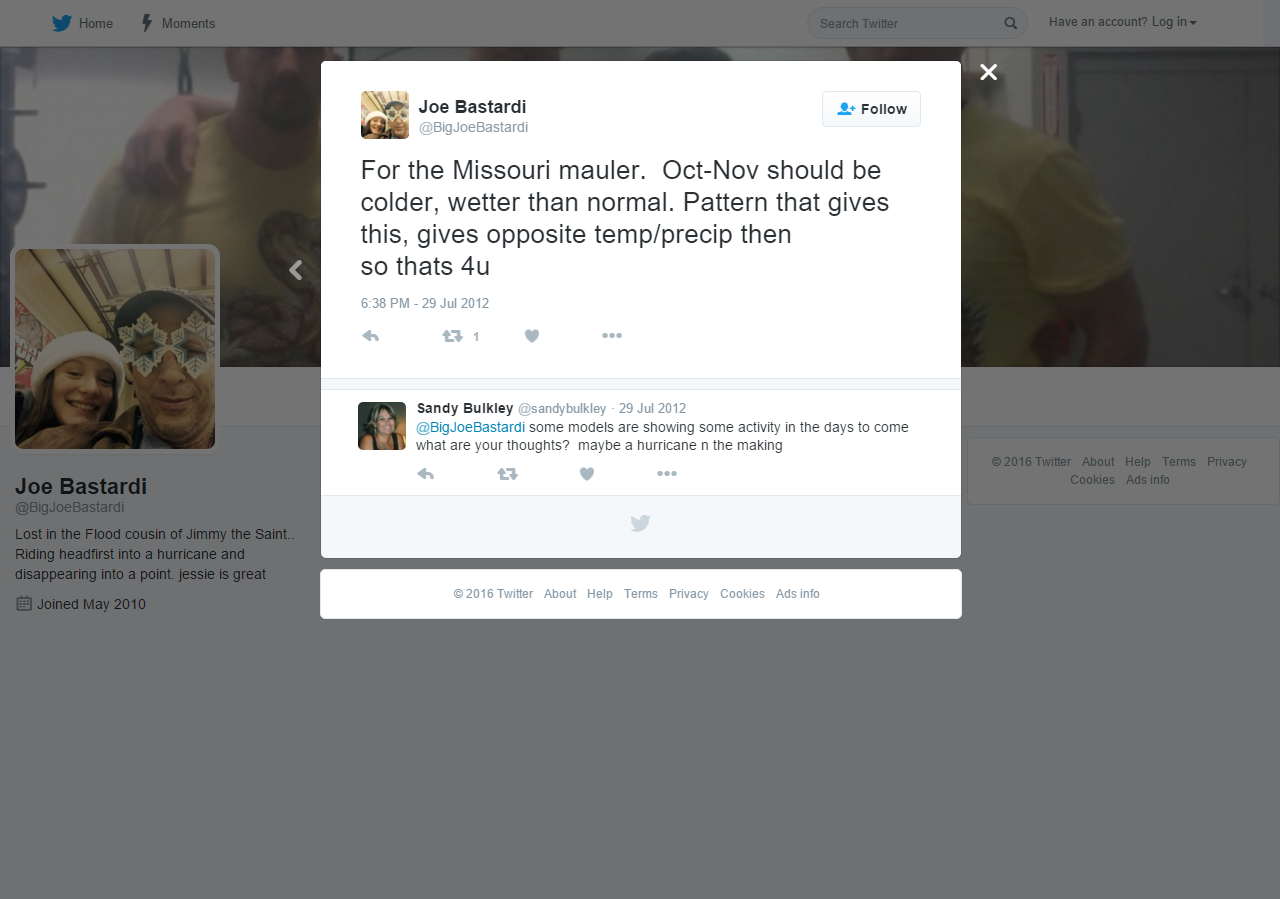 Posted by Joseph Renken at 2:52 PM No comments:

As promised, here is the updated Day 2 Convection Outlook from the SPC.

Take note of how they mention the threat continues after dark.  If you know anyone in the highlighted regions above, please let them know the severity of the situation.
Posted by Joseph Renken at 11:06 AM No comments:

Below you see a tweet regarding the BSR 500mb forecast for the period of February 14th-18th. 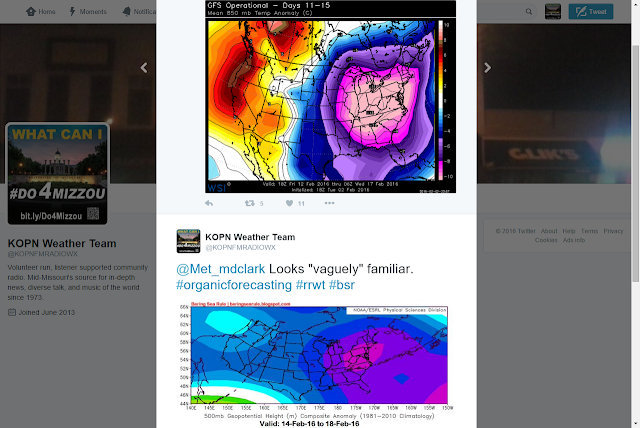 That forecast was made on February 2nd.

Look below for what happened during that time period.

Admittedly, the Rockies and West Coast did not perform that well.  That being said...the East Coast and Northern Mid-Atlantic was nailed.

Also, someone on social media got all but hurt regarding my last post on "Today's Severe Weather" and how it must be nice to hindcast.  Well...after the brief Facebook exchange that he had with me, I looked in my prior postings...lo and behold...

Severe Weather? Say It Isn't So! showed towards the middle my thoughts on the President's Day severe weather.

This was the Day 4-8 Outlook from the SPC issued on January 8th for the period ending 12z January 16th...


Both times they recognize that severe weather could be possible, but the risk are too low to be issued in the forecast.

Here are the storm reports for the 16th. 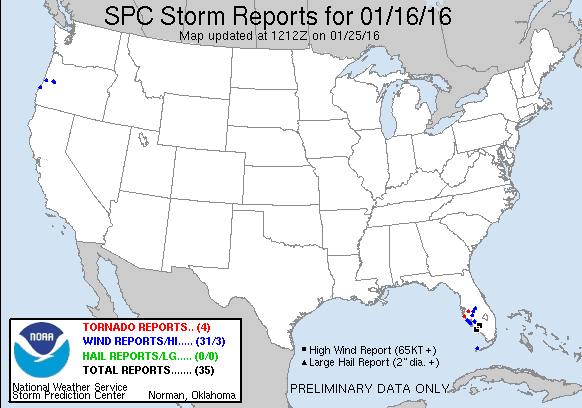 Posted by Joseph Renken at 3:01 PM No comments:

The recording of my presentation shown above is available here.  I have also placed it on the right side with our 40th CPCDW in Denver, CO. It shows the power point presentation while adding my voice.  Can you tell I was nervous?
Posted by Joseph Renken at 5:21 PM No comments:

To say that it's been busy in the weather world is an understatement!  I've been having friends of mine talk about how the "rule" of the 500mb OBS are still showing up a tad NW of the BSR, but the pattern still holds!

Let's look at what the BSR was showing for today... 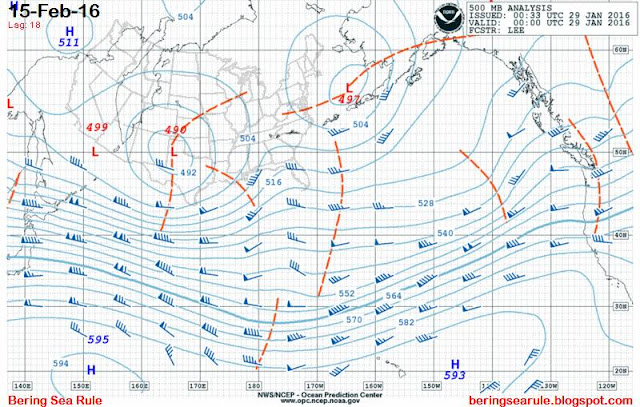 As of right now we have a severe weather outbreak ongoing in the Deep South. 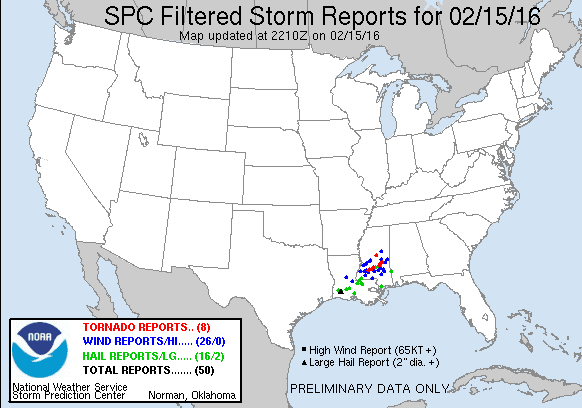 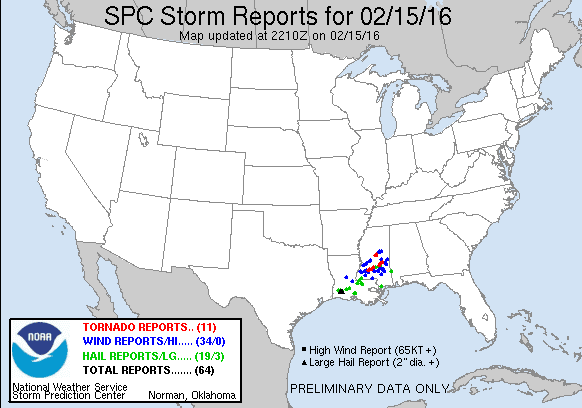 Once again...the BSR gave a heads up for the pattern at hand.
Posted by Joseph Renken at 2:30 PM No comments:

Severe Weather? Say It Isn't So!

The GFS has been showing a severe weather set up centering around the 20th of February. 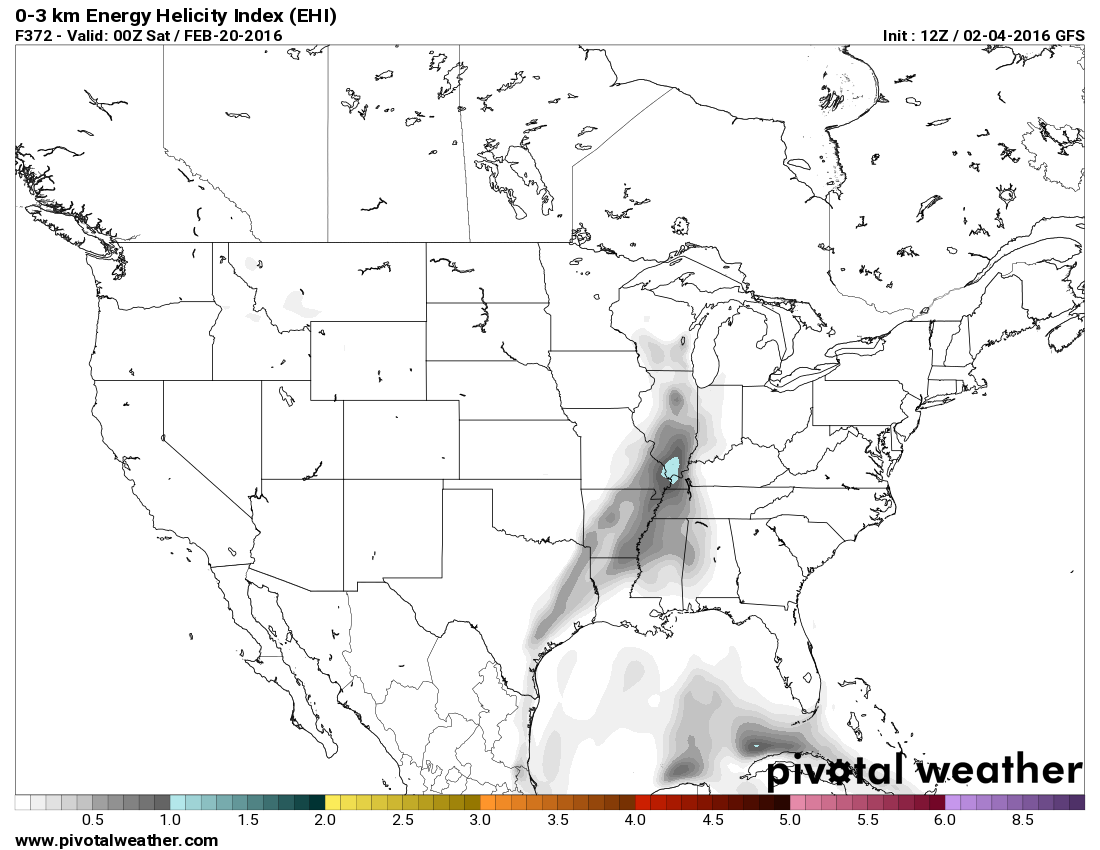 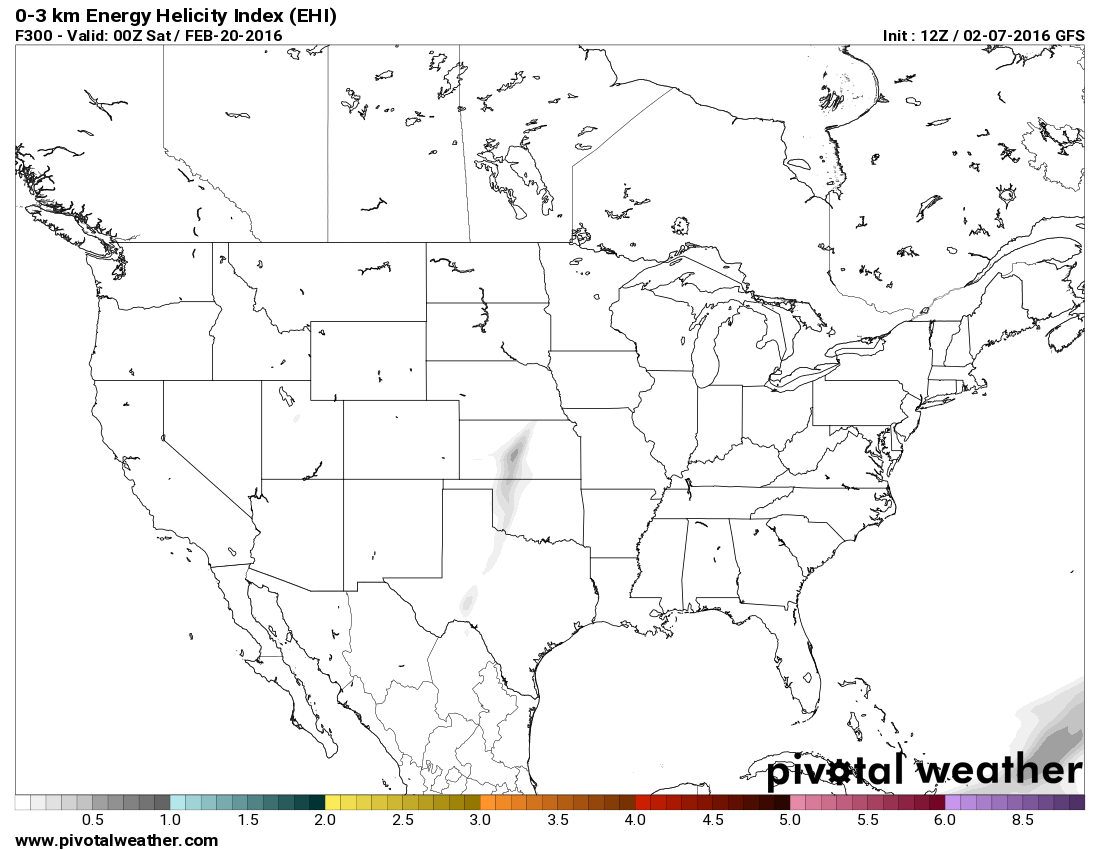 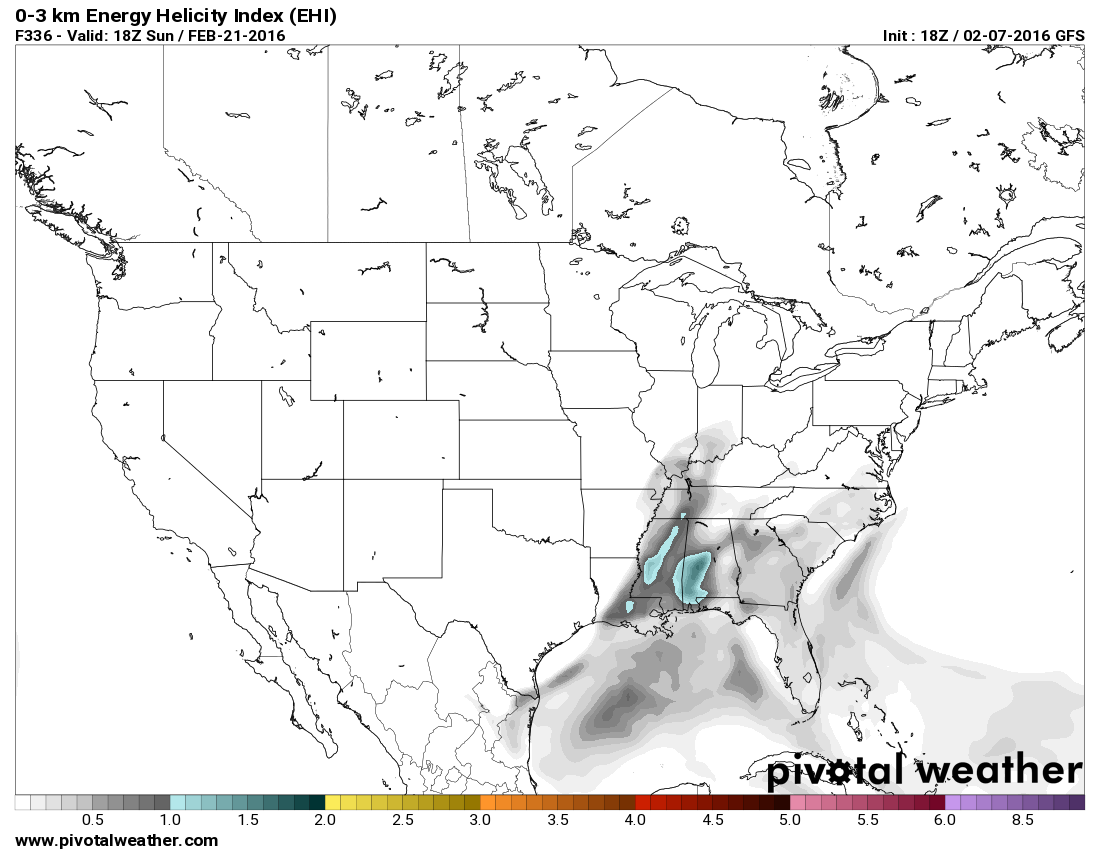 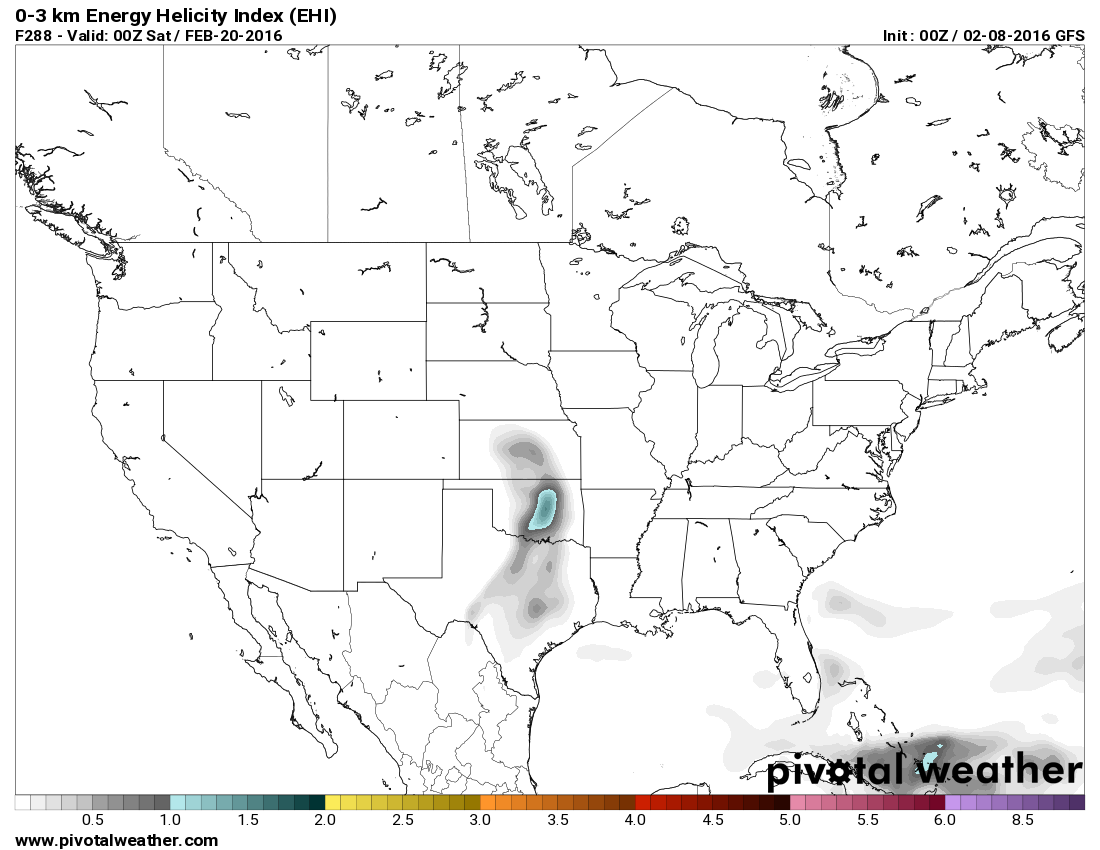 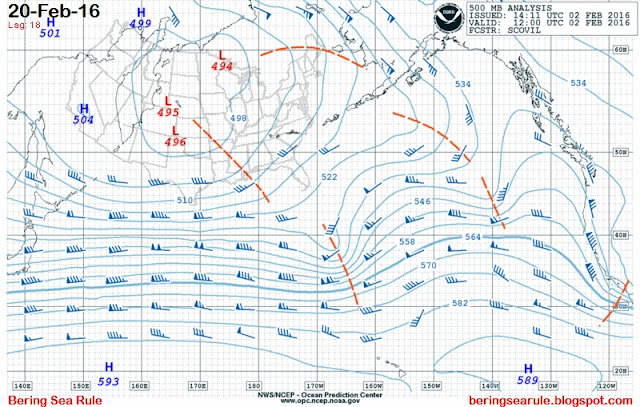 Then, the system that the GFS is hinting at with severe weather on the 20th comes in based the first part of this post.

Apply this to the Recurring Rossby Wave Train and you get the Severe Weather Outbreak of 26DEC15-28DEC15... 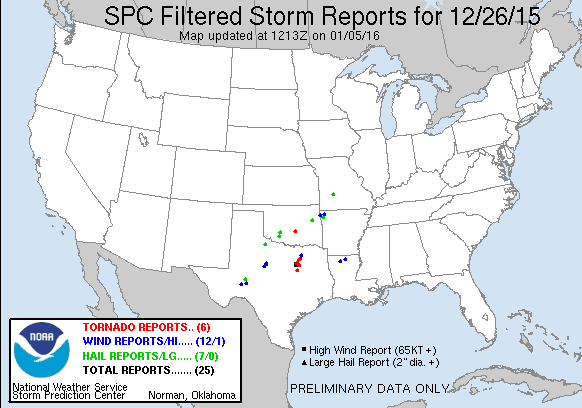 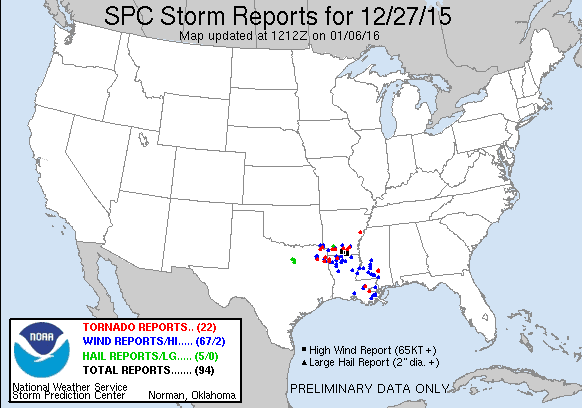 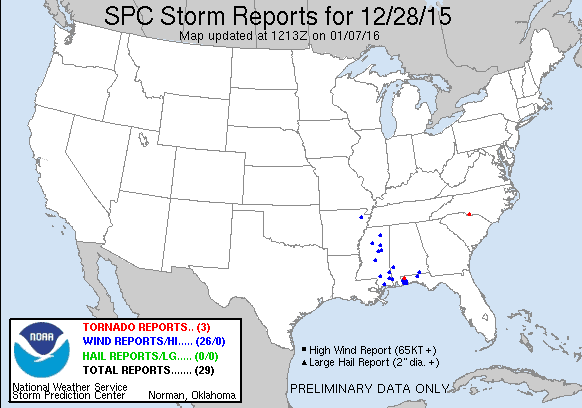 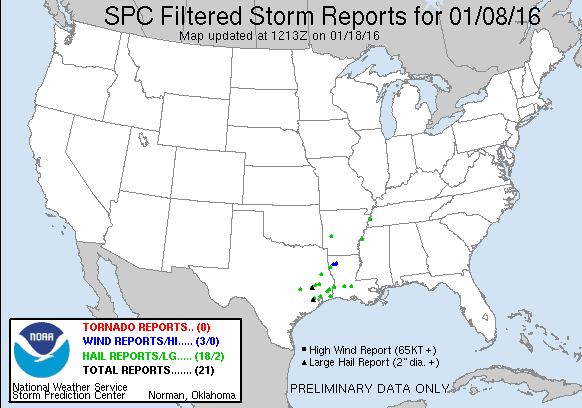 I believe the 20th system is a bit too fast for the GFS to be sniffing out as it doesn't match the severe weather on the 8th of January.

We will keep you updated as time moves along via SPC outlooks!
Posted by Joseph Renken at 10:12 PM No comments:

Part of my research partners focus is the Recurring Rossby Wave Train. In fact, the #RRWT recently scored better than 70% for 86-90 day forecast in the 5 day average within 6° for Chicago, IL!

Now, if we apply the 50 day cycle to our mid-February storm we get the late December period.  Here are the 6-10 day cpc precipitation outlooks.

Compare that to the updated below...

Below are the results from December as a whole for Columbia, MO... 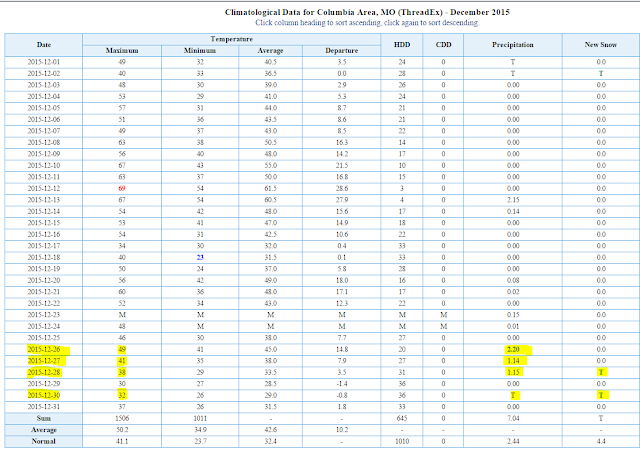 I highlighted the period in question.  Note the 2.20", 1.14", and 1.15" rainfall totals.  We experienced some backside snow, but since the moisture had already moved East, nothing but a trace was recorded.

Once again, the potential for a significant storm is there for mid-February.

Here is Josh's #rrwt forecast maps for the period as they pertain to Surface Low Pressure... 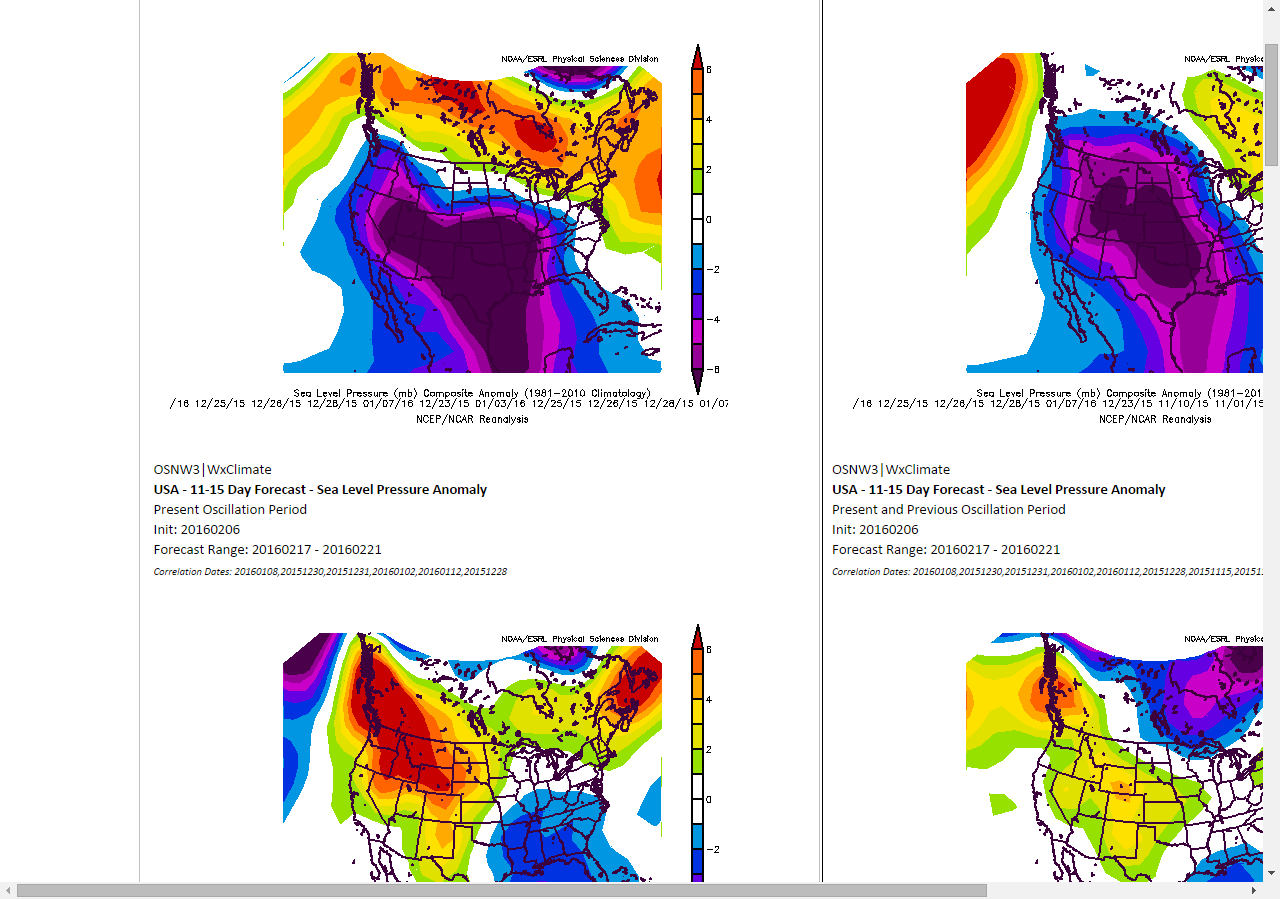 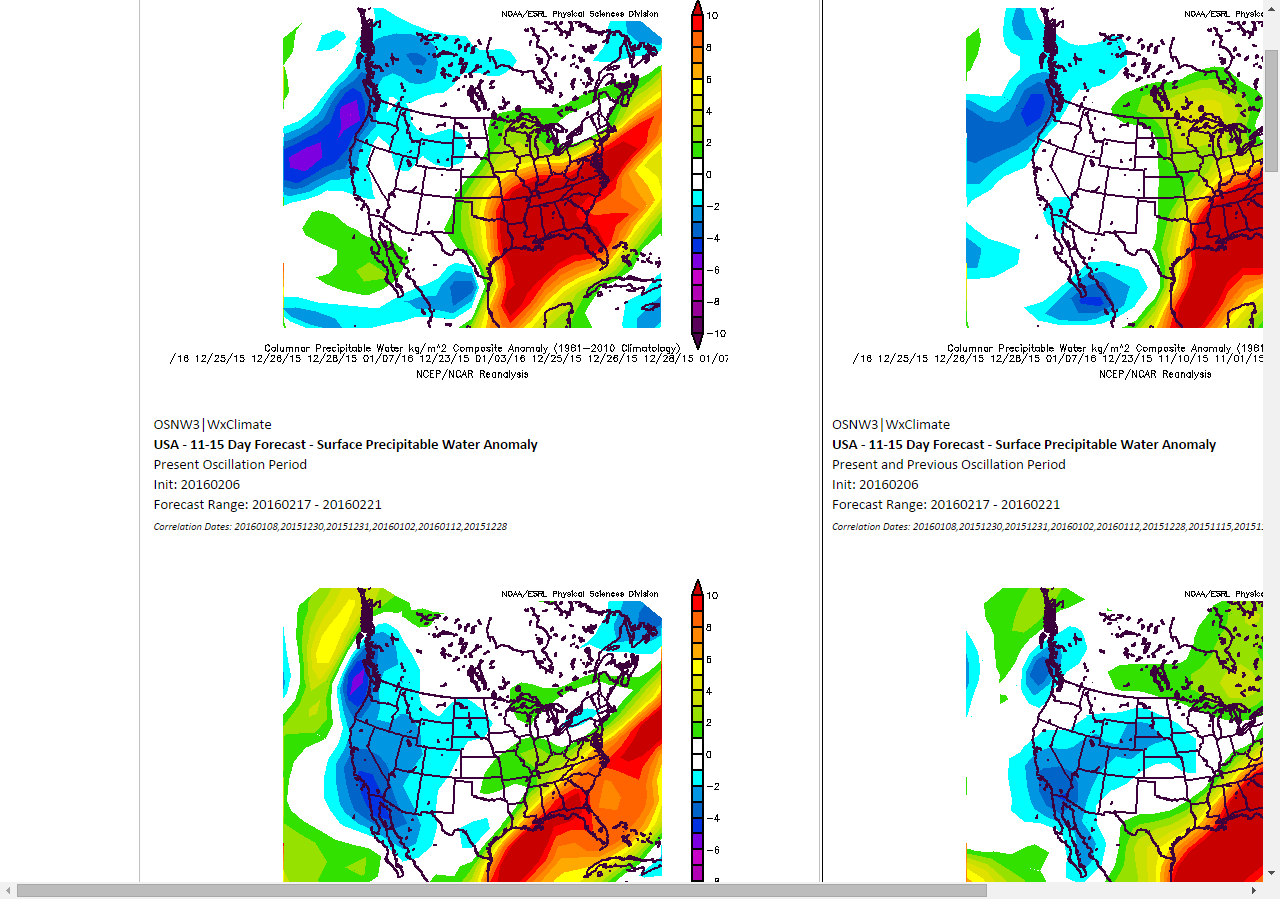 Note the "back-end" style of greens stretching from OKC northeast towards St. Louis and continuing into lower Indiana.  This is trademark snowfall look as seen in the example below...

The radar image above is a particular time stamp, so even though the graphics above it show a 5 day range, it has the same "pattern look" to it.

Posted by Joseph Renken at 11:05 PM No comments:

Once again, the BSR is giving people a heads up on the pattern at hand.  I know that there are #socialmeteorologist who are claiming they called this next big storm.

Here is what the BSR showed us in late January starting on the 29th. 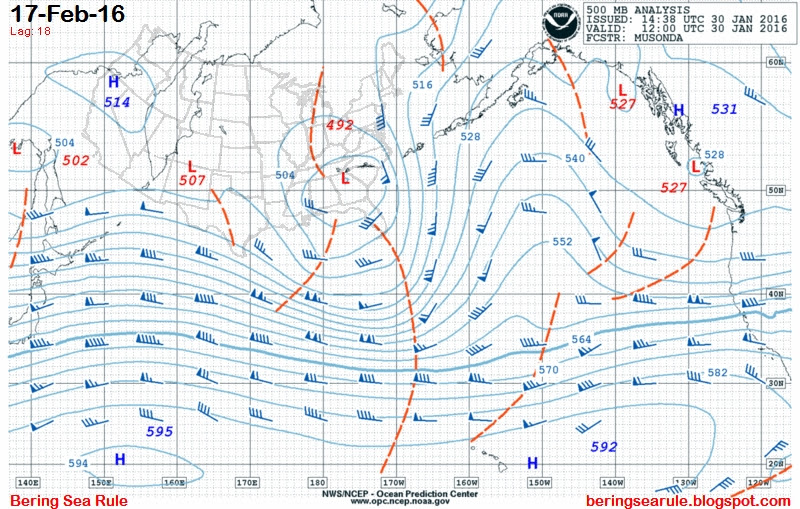 The models are starting to showing a significant storm becoming an I-70 special.  The control run of the CMC and GEFS are the dark circles.  The CMC goes from Northern Arkansas into West Central KY,

Here is the European Operational run from this afternoon.

The 18z GFS depiction is a tad farther North of the European.

I will NOT show snowfall maps as that makes people believe that the exact scenario will happen.  We are between 9 and 10 days out ladies and gentlemen.  Note how the first graphics show a 500mb ull moving almost due West to East and then apply that to the models showing a West to East movement!  The key to the BSR is how we...

Sniff out the pattern, specifics come later!
Posted by Joseph Renken at 4:52 PM No comments:

It was brought up on the Accuweather forums via a member in Ohio that the BSR failed in January...

I'm not a big fan of using the BSR for predicting every day weather patterns. It did pretty bad in January. I much prefer using the TR for that, and leaving the BSR to predict big systems.
If we were to use the BSR to forecast January, we would be using 2014 as an analog to say the least. It suggested that we'd see an eastern trough for 30 days straight.

As you can see, the 500mb shows that the below normal category stretched all the way into the lower peninsula of Michigan.

Look at the 850mb representation...

Once again you can see that lower anomalies covered all of the Eastern CONUS and even into Canada.

Here are the 850mb temperature anomalies... 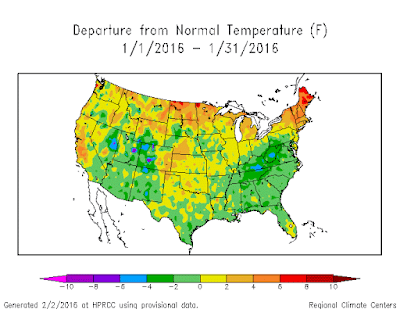 As I told the member on the forums...

One of the things that I was having to remind people is how "stale" the cold air was on numerous occasions.

It has been stale when it was here but it was because of the snow cover.  January was much warmer than what BSR would've suggested.

My final rebuttal before creating this blog.


The BSR didn't suggest a cold January. It suggested below normal 500mb heights.


As you can see...the mid-levels did not agree with the surface temps.  On January 6th, I explained to a good friend of mine my thoughts on the pattern and how I kept seeing storms occluding quickly. 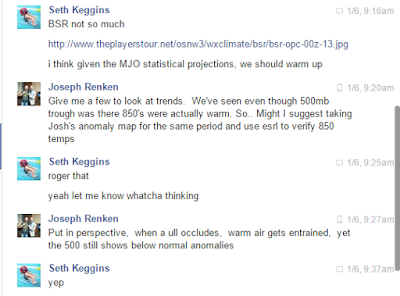 The data clearly shows that the BSR was correct in the depiction of what we expected in the mid-levels of the atmosphere and due to the timing of occlusion in an already stale environment, the lower levels just didn't match.


Lastly, might I suggest that you look at my research partner's data here where he archives all of his ESRL maps.

Posted by Joseph Renken at 3:24 PM No comments: