When You Have Been Parodied!

Sorry that it has been some time since I've posted but life events have taken their toll on my ability to keep up here.  Since my post last month the popularity of our #organicforecasting method has gained some steam.  This, in due part, because of a few meteorologist who have been able to utilize our methodology very well in forecasting past the models current 14 days.  Not only that, but they have the ability to let their viewers know that when models go through the typical "cha-cha", that they need to be confident that the #organicforecasting method holds true.

Yes, we have seen some set backs here and there since I've started utilizing this method in earnest over 3 years ago.  However, that being said, our success has outpaced the set backs. We will continue to learn from the bust potentials that we've gone through and strive to improve the forecasting method.

With the above in mind, I found out four days ago that someone in Boston, MA created a parody twitter account to bring out our "failures".  One issue that I have is where they came after one of the meteorologist who utilizes our system, Michael Clark of BAM Chase. 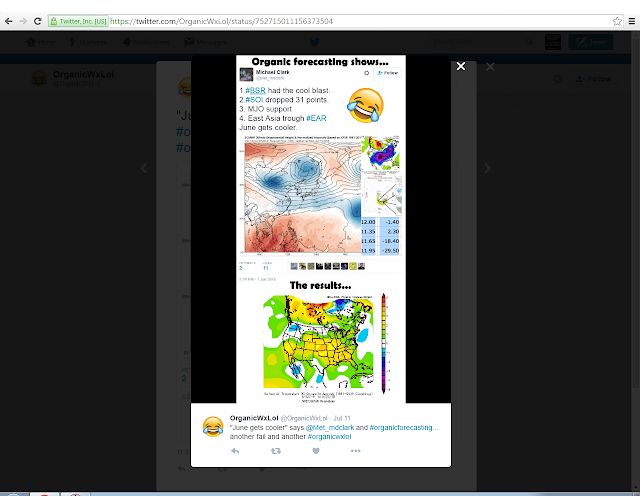 The above maps are utilizing the same reanalysis set from the Earth Systems Research Library so there is no confusion. As for the legend, even though the numbers on the right are set different, the range is still at .5 for each color code.

Let's place them side by side and you tell me if what we said came true?